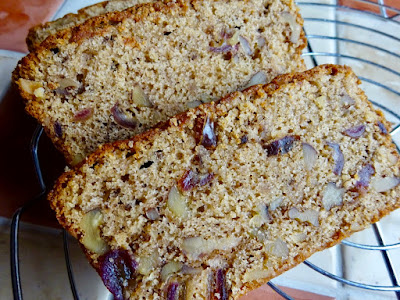 A recipe from my sister, who lives in Playing Place. This is my brother in law’s favourite!
Not completely straightforward but still, easy and absolutely delicious. Thank you Eleanor!
You will need a 2 lb loaf tin, lightly greased and line it with baking parchment, hanging over the long sides to help lift it out. and pre heat your fan oven to 170C

In a medium bowl, cream the softened butter and sugar till fluffy.  Add the egg yolks and mix well.

In a separate bowl sieve together the flour, baking powder and spices. Add the dry mix to the creamed mix, alternately with the milk, beating after each addition.

In another bowl beat egg whites to stiff peaks and fold into mixture.

Pour into loaf tin, then bake for about 45 mins. Cool in tin on a rack 15 mins before turning out.

So much flavour and a wonderful texture. Yum.

Posted by CornishKitchen at 01:30 No comments: 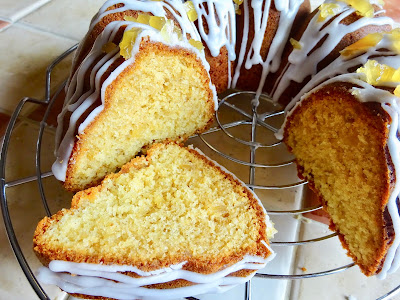 I have made several ginger cakes before, but had to make this one as it belonged to my old friend Atty. Utterly delicious especially if you are a ginger nut, as I am!

This cake lends itself to a ring tin and I used a 9 inch one. But you can use a 8 inch square or similar. Line the base and pre heat your fan oven to 160C. If using the bundt tin, butter it generously, ensuring it will not stick.

Cream the butter and sugar together in your mixing bowl until light and fluffy. Warm your syrups a little and add them to the beaten eggs. Add to the creamed butter and beat well. Sift the flour and ground ginger and fold in along with the ground almonds. Stir in the chopped ginger then tip into your prepared tin. Bake for about 45 mins, until springy. Allow to cool in the tin for a few moments then tip onto a cooling rack.

When cold, make a light runny lemon icing [or like me with a little more ginger syrup] and drizzle over, then decorate generously with some chopped crystallised ginger for that extra hit! 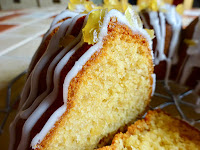 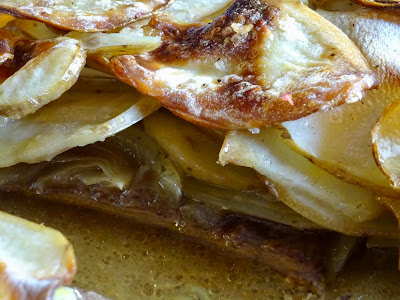 CORNISH UNDER ROAST No 2

Over the winter I have been “double posting”, with all the old traditional Cornish recipes. This is the last one, before I return to my usual posts - of mostly old ish bakes, a few new, and everything in between, as I trawl through old books, the WI, plus my folders of clippings that I have been collecting for probably 50 years. I have numbered this Under Roast “2” as there are so many versions, every family had their own ways and these were handed down from generation to generation. My first one used a base of finely chopped carrots and onions and skirt. BUT I have been talking to many of our older Cornish folk, listening to their memories about what their grannies did. So, this is a compilation of their recipes, the most usual and commonplace form of a Cornish Under Roast.

You need “good steak” says Cornish Recipes from the 1920s. By this and from what others have told me, this would be braising steak or rump. Cut not too thickly. Also you need a good floury potato. And onions, lot of them. A little seasoning, a little flour, maybe a little chopped parsley and lard or dripping to brush the sliced potatoes. Some made gravy to go with it, some not. Most used an old enamel baking dish, some quickly flash fried each side of the meat to give it a little colour, some not. I have not spoken to anyone who covered this dish.The top layer of potatoes were well browned, crisp and crunchy, underneath while.

I have used thinnish cut rump steaks. You will need a shallow roasting pan, I used a cast iron one, and heated it to high then quickly fried the steak in a little lard [or dripping], turning the steak as soon as it browns. Turn the heat right down or off. Take about a dessertspoonful of plain flour and stir into the meat and juices. Season with a little salt and plenty of fresh ground pepper.

Peel and slice [not chop] a couple of medium onions and cover the meat. Season lightly.

Peel your potatoes and slice fairly thinly. These days, it is far easier with a mandolin. But if you have a good eye and a steady hand, slice by hand.

Brush the sliced potatoes generously with more lard or dripping and pop into a slow oven for about 3 hours. I cooked the above at 140C for half the time, then turned it down to 130C. Allow to rest for ten mins before serving.

Notes:
I have spoken to a couple of folk who towards the end of the cooking time, popped a thin crust on the top for half an hour. Interesting.

I cannot see why you can’t lower the temp for a longer cooking time. There were no timers in the olden days!

There are still many old Cornish recipes that I have not repeated. Like Boiled Pasties and Suck Cream. They are all there if you look. I will gladly repost any requests. But for now, summer is here, rellies are coming to stay and holidays approaching. I will be continuing to post up until the end of August, then I will be having a 6 week break.

In the meantime, if you have an old recipe, please don’t hesitate to contact me and I will bake and photograph it. lauriemb@sky.com

The Cornwall Hospice Association will be bringing a second cookbook out before Xmas and I have been a contributor once again. The theme this year is “handed down”. More details on that before long! It looks great!

Posted by CornishKitchen at 01:31 No comments: 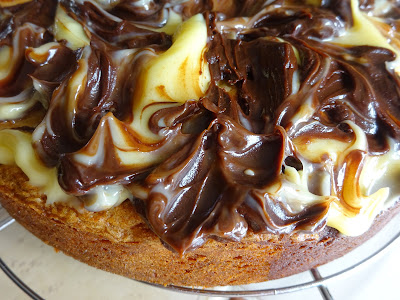 I love a good marble cake, but it must be moist and full of flavour. This is doubly so, with a swirly chocolate topping. This recipe is from my clipping folders and is full of white and dark chocolate and ground almonds! Yum. Marble cakes are a pain, as they do use double the bowls but, trust me, this one is worth the extra dishes and clearing up!

You will need a spring form 8 “ cake tin, lightly buttered and the base lined. Pre heat your fan oven to 160C

6 oz chocolate - half white and half plain dark, each melted separately in small bowls, over simmering water or a microwave. In the meantime…..

In a bowl, whisk your egg whites until you have stiff peaks, set aside for a mo.

In your mixing bowl, cream the butter and sugar until light and fluffy then continue whisking, adding the egg yolks, one at a time along with a small spoonful of the flour with each addition. Stir in the ground almonds.

Now fold in your egg whites along with the rest of the flour, a little at a time, until all is well mixed. Take about half of the mixture out [no need to be too exact] and place in another bowl. Add one chocolate to each bowl and mix well.

Place alternate dessertspoonful dobs of each chocolate mix in your prepared tin and very lightly swirl. Try and level off as best you can without mixing it too much. Bake for about 40 mins until firm. Leave in the tin to settle, then cool on a wire rack.

Chop the chocolates and melt them separately in your microwave, allow to cool for a bit, then beat each into half the butter. Place little alternate dobs on the top and swirl - I used my index finger [after washing it of course!]. Yum yum, piggies bum.

Note: Equally good without the topping. 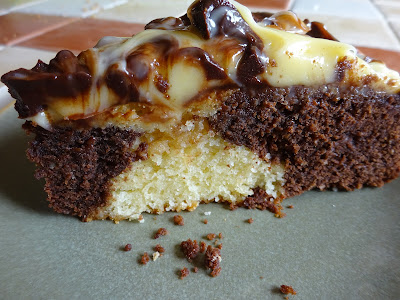 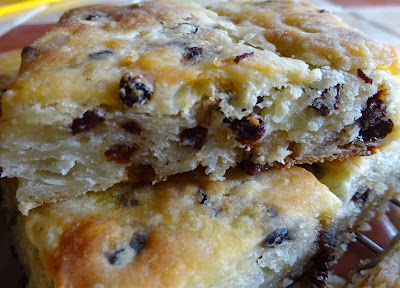 I have been asked to post this recipe by Elaine who has fond memories of tasting it! A very old recipe, although I have never posted it before. I have always had the recipe, from the wonderful Cornish Recipes 1920s book, but never made it, as I was not quite sure about mixing potato and sweet ingredients! BUT how I wish I had done this before! Thanks Elaine, for giving me that jolt. I have used currants, but some would have used sultanas. Your choice. When using inverted commas I am quoting the book. I made half the quantity and this made 12 large squares.

“Mix all together with milk or buttermilk, into a stiff dough, roll pout and pout on a baking sheath, lightly cut in squares with a knife, and bake in hot oven.”

I used milk as I had run out of buttermilk. Elaine recalls it made with sultanas. I mashed the potato before adding it to the other ingredients and mixed well before adding the liquid. I used a fraction under 5 fl oz of milk to mix.

Place on your prepared baking sheet, square if off and roll out evenly then cut into squares. I have a small rolling pin and always find it easier to roll out on the sheet.

Well, what a surprise! Just delicious, especially buttered!! Plus, just as good the next day. The texture is quite different and a little strange!  I think it needs a tad more sugar though. I should never ever have doubted our forebears!! I do hope you enjoy this Elaine and it brings back many happy memories. 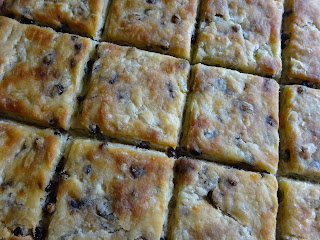 Posted by CornishKitchen at 02:31 No comments: 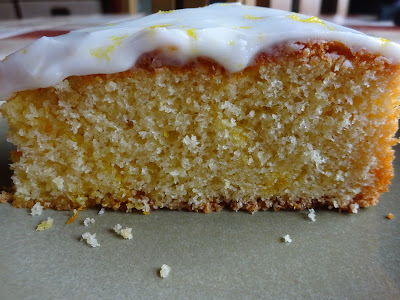 I absolutely love the flavours of oranges and lemons. So say the bells of St Clements. Here is just a simple cake, from my folder collection that is full to the brim with those citrus tangs. Intensely orange and lemony. Yum

You will need an 8” spring form cake tin, lightly buttered and lined. Pre heat your fan oven to 150C

In your mixing bowl, cream the butter and sugar until light and fluffy. Add the eggs, one at a time, beating well after each addition then add the orange juice with a spoonful of the flour. Sift the flour over the bowl and fold it into you mix.

Tip into your prepared tin. Take your grated orange zest and stir it into the lemon curd. Add little teaspoonful dobs of this mix all over the top of the cake [not in the exact centre though] and swirl it around carefully with a knitting needle. Bake for about 35-40 mins until firm and golden. Rest in the tin for a few mins before cooling on a rack.

When cold, make a topping with some icing sugar, lemon zest and lemon juice [get zest first]. Cover the cake generously and sprinkle over a little more of the zest. You will love this!! trust me.

Posted by CornishKitchen at 01:58 No comments: