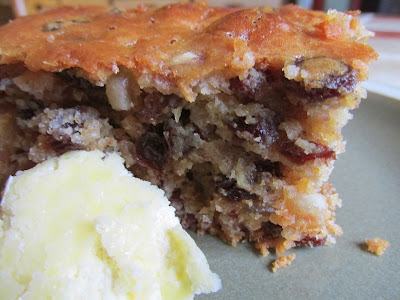 This recipe was given to me by Margaret Lawry from Penzance and it was her mother, Vera Harvey’s recipe. The family came from around Paul, near Mousehole and this pudding was baked in October for the local Methodist C
hurch Feast. Margaret says they sometimes made it at Christmas time too, as an alternative to the traditional pudding.
It is much lighter than the traditional Christmas pudding and very fruity. Thank you so much Margaret, it really is a wonderful recipe.

Mix all the dry ingredients together, then add the juice, eggs and milk to a soft dropping consistency. So easy and quick.

Place in a preheated fan oven, 140 Deg C for 1 hour, then reducing to 120 C for a further hour, until firm and a skewer comes out clean. So delicious! Serve with clotted cream, of course!!!! Or custard. My husband has both!!

Any left over pudding may be cut into squares and popped in the freezer to reheat. 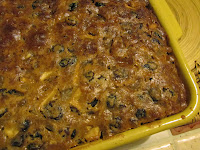 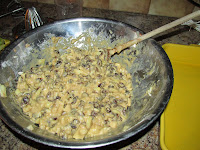 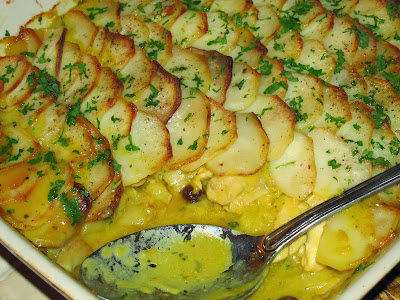 
I was going to call this Saffron Fruity Zesty Chicken but what a mouthful! Then thought of Cornish Chicken but that was far too pretentious! I was racking my brain trying to think of a name for this recipe, then decided on the simple!
While researching recipes for this Blog, I came to realise there are no chicken dishes in our culinary history!! Of course, we had roast chicken, but only on rare occasions. I was married, I think, before we routinely had turkey on special days. Before that it was a caponised chicken. My father was a butcher, so we were lucky in post war days and I have spoken to many older friends who never ate chicken until well into the 1950s. There are no chicken dishes in my old Recipe Book! Incredible, isn’t it? The old Cornish loved beef most of all, along with pork, game, veal and mutton. And fish and seafood of course.
So I thought I would work on creating a tasty chicken dish, using basic Cornish ingredients! Leeks were in, of course, along with a little fruit and zest. Nutmeg and lots of parsley! You cannot have a Cornish dish without those ingredients!!! So then I was left with the sauce. I decided to go for saffron, along with a little sherry and stock. Most pies are topped with a crust but many have sliced potatoes so finally I decided to plump for the potatoes.
I set about building the dish, with not a clue as to how it would turn out! [you are safe to read on… it was absolutely delicious]

For 4/5 generous servings, I used:
Double pack of mini chicken fillets, cut in half or thirds [or breasts will do, of course]
Pack of skinless, boneless chicken thighs - each cut into about 4 and trimmed of any fat
1 large shallot, finely chopped
2 large leeks, cut in half longways and chopped
zest of 1 large lemon
Rapeseed oil [olive oil is OK]
½ teaspoon nutmeg
large handful big juicy raisins [figgys]
1 ½ oz plain flour
1 ½ oz butter
½ teaspoon dried English mustard
1 level teaspoon dried mixed herbs
8 fluid oz milk
12 fl oz hot chicken stock [I used one [cheaty] chicken stock pot in boiling water]
Saffron - I wanted it full of flavour, but it is difficult for me to say how much I used. It will depend on the quality. A fair bit. Add a little at a time.
Glug of sherry [I used Amontillado]
Sea Salt and freshly ground pepper
Parsley - large handful, plus more for the top to serve.
2 - 3 lbs potatoes [a little more if you wish] sliced. [its handy to have a small mandolin] 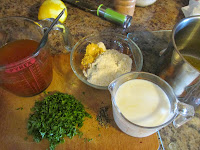 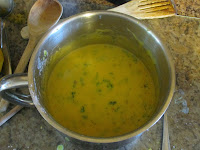 Heat a large pan with some oil. Start frying your shallot then add, in 2 batches, the chicken to brown, grating lemon zest into each batch. Season, then transfer to an ovenproof dish. Then fry the leeks, adding more oil when needed. Add the leeks to the chicken and stir in the raisins. Sprinkle over the nutmeg. Set aside while you make the sauce.

Dry the saffron in some parchment in a warm oven for 10 mins. Crush with a rolling pin and add to the very hot chicken stock. Melt the butter in a pan, take off the heat and stir in the flour and mustard to a smooth paste. Gradually add the milk a little at a time until it is used up, then add the saffrony chicken stock and sherry and dried herbs. Add some more strands of saffron if it’s not yellow and fragrant enough. Return to the heat and keep stirring until it boils and let it cook off for 2 minutes. Season well with plenty of sea salt and pepper. Stir in the chopped parsley. Taste and check.
Pour it over the chicken, leeks and raisins and stir to evenly distribute.
Peel the potatoes and slice. In a hot pan, quickly fry the slices for half a minute or so each side, in some more rapeseed oil. Collect all the slices on kitchen paper until the batches are completed then arrange in rows on top of the chicken. Season once more with plenty of fresh ground pepper.
Bake for about 45 mins at 190 deg C, watching the potatoes and turn down if they are browning too much. 1 hour if from cold. I did mine in the morning then reheated late afternoon. Sprinkle over more parsley to serve. I also served some green beans and broccoli to accompany the chicken.
Everyone enjoyed it and took seconds!! I was thrilled! It really was delicious. Great for an informal dinner party or special meal. Or just to treat yourself. Next time I might try it in individual dishes.  Add a little more flour if you want a thicker sauce - this is medium. It had also crossed my mind to maybe add a few chopped dried apricots along with the raisins. 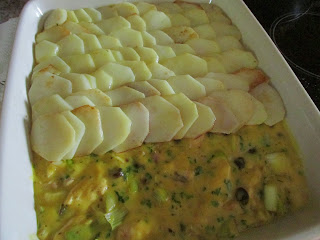 Posted by CornishKitchen at 03:07 2 comments: 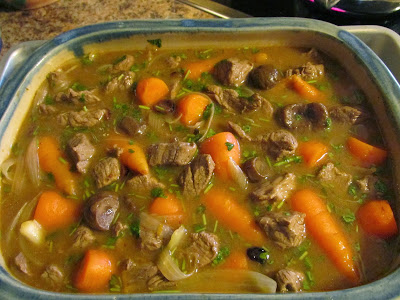 Beef in Ale with Chestnuts and Cranberries

A great dish for a special meal with Christmas themes! It’s that time of the year when we are planning our menus for the festive period and this is just perfect. No last minute work, except add a green veg and some mash - to soak up all the yummy gravy and very easy. Chestnuts are so delicious and we do not make use of them nearly enough. 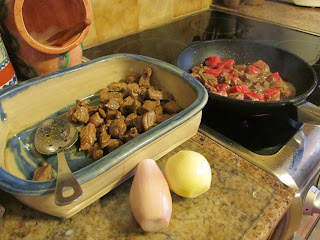 Brown the beef in a hot pan with the oil. This is essential - it seals in the flavours. You will need to do this in 3 or 4 batches. Yes, I know it makes a mess of the top of the stove but it is worth it! Transfer the meat to a casserole dish. Add a little more oil in necessary and fry off the shallots and when just softening add the flour and keep stirring to cover them, then add the stock and ale, followed by the nutmeg and cranberries and orange zest and juice. Bring to a boil. Season generously and pour over the beef. Tip in the chestnuts and parsley, stir well and cover the dish [I used foil]. Put in a hotish oven 190 deg C

Wash, top and tail the carrots - I never bother to peel them and par boil for five or ten mins.
Tip them into the beef mix after about 45 mins of the cooking time. Re cover then back in the oven for a total cooking time of 1¾ hours, turning the oven down to 170 after about and hour and a half. I prepped and half cooked the casserole then chilled overnight to continue on a timer the next day. I have not done it, but cannot see why it cannot be frozen halfway and de frosted in a fridge, then add an extra 15 mins to the remaining time.  It is so delicious and will happily keep in the fridge for a day or so. Enjoy!

Posted by CornishKitchen at 07:32 2 comments: