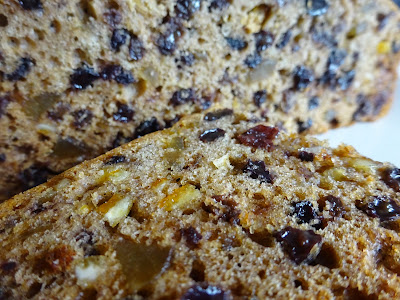 Matthew, originally from Penzance sent me this recipe, with a photo of the page, and so my grateful thanks go to him. The ingredients combination is quite different and so delicious. The cake is very moist and I imagine will be a great keeper. I wonder where it came from and how old it is? Leave for a couple of days at least before cutting.

You will need a 9 inch spring form cake tin, greased and lined. Pre heat your fan oven to 150C.
The recipe below is for a very large cake, so I made half the quantity and used a 6-7 inch square tin, for a change.

In a large bowl, sift the flour, sugar and bicarb and rub in the butter. Add the cinnamon, currants, ginger, and peel and mix to a soft consistency with the eggs and milk.

Tip into your prepared tin and bake for about 1½-1¾ hours until a fine knitting needle comes out clean. My smaller cake took just over an hour. Leave to cool in the tin then turn out onto a rack. Best left for a day or two before cutting.

Note: my smaller sized cake took just over an hour to bake, I turned the oven down to 130C  after 45 mins. I have never tried the larger size but I would advice you to turn it down after an hour plus perhaps cover to stop it browning. 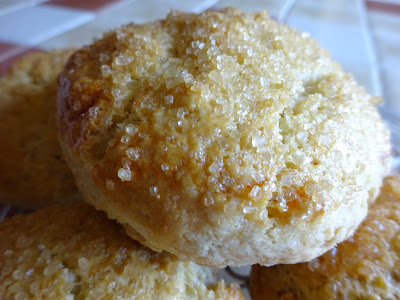 Another pre war Be-Ro recipe from their baking booklet. This recipe is probably about a hundred years old and it is such a shame we do not bake these kind of buns any more these days. Simple traditional baking, these buns are scone like and great split and buttered. Yum. Best eaten within a day. Just as they cooled my husband ate 3 off the trot. Did you know that SR flour was invented in Bristol in 1845 by a man named Henry Jones who then patented it?

Mix the flour and salt in a small bowl and run in the fat. Add the sugar and very finely shredded peel. Add a few drops of the extract to the milk and egg and mix to a dough. Divide into 8 portions, forming into buns in well floured hands. Place on your buttered baking sheet and brush over the left over beaten egg. Sprinkle with coarse sugar and bake for 15 mins.

Mmmmm,  lovely eaten warm, simple baking from a bygone era. Made in minutes, I can just imagine them being made for Sunday tea time.

Note: Coarse sugar? Would there have been demerara a hundred years ago? Actually,  yes. So I am using that.

Posted by CornishKitchen at 00:27 2 comments: 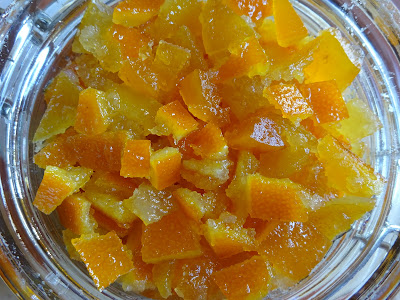 Not to everyone’s taste and yes, it is easy and cheap to buy and us Cornish put it in just about all our baking. What would Heavy Cake be like without that citrus hit? But if you make your own, with one taste you will never go back. For the large jar [and a small tub] in the photo I used 1 red grapefruit, 2 large lemons and 3 oranges. The weight after boiling was 1lb 2oz plus you still have the fruit to eat of course, and I froze the lemon juice.

Peel some oranges, lemons and a grapefruit, making sure you keep the pith attached. Cut it into strips of about an eighth of the fruit. You want all the pieces about the same size. Place them in a saucepan, cover with cold water and bring to the boil. Drain, then repeat 5 times more. But after the final boiling, cover the pan and simmer until the peel is tender. [I will admit this is a pain in the butt]. Throw away the liquid.

You now need to weigh the peel and in the pan add an equal amount of granulated sugar. Add a small amount of water [I used about ¼ pint] and bring to the boil, carefully stirring the sugar to dissolve. Simmer, very lowly, uncovered until you have a very thick syrup, which will probably take about 2 hours. Drain and cool.

Sprinkle caster sugar on a sheet of parchment [on a clean tray] and toss the peel in it until the peel is covered. Preferably in a single layer. Leave it overnight before placing in an airtight clean jar.

A Great gift too. Will keep for several months in a cool dry place. My next post will be an old Be ro bake that uses the peel - it’s also great on ice cream!

Note: You can make just one flavour, if you wish.
Posted by CornishKitchen at 07:07 1 comment: 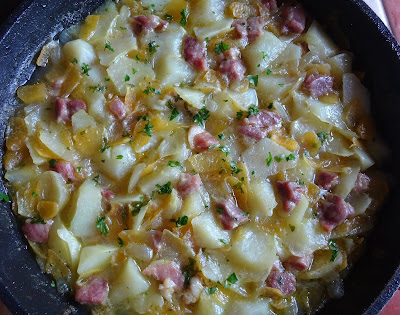 I have not spoken to a single Cornish person, older than myself [70] who has not eaten and enjoyed Raw Fry. A staple in the diets of bygone Cornish folk, miners, fisherfolk and farmers alike, second only to a pasty.  But everyone I have spoken to, has a slightly differing version. My husband remembered his mother using potato and swede, a friend from Stithians, Joyce, says her mother only used potato and onion…. and so it goes on. My good friend Jeny says that her mother always used a shortcrust topping, placing it in a hot oven for about fifteen minutes before serving. But they ALL agreed you start off with bacon!! Proper bacon, that is. I am sure there are as many slight variations as there are villages and towns in Cornwall! Well, almost. Raw Fry has been cooked for ages. I set about trying to re-create the best Raw Fry I could! I was determined not to Post until I was happy with the final result. One thing I found out right away - it is much nicer with swede! Then there is the problem with our “modern” bacon, injected with water. Do NOT use this bacon. I bought a whole ham hock from the butchers in Falmouth and with no water added, I was assured.
Take:
About a small half of a whole hock, chopped with a little fat left on, or a piece of bacon, left whole. I made a delicious Ham, vegetable, bean and potato stew with the other half.
A finely chopped medium onion or large Shallot. Swede and Potato in equal quantities. Poached or fried egg to finish, if you wish, or pop a crust over and bake. Some herbs of your choice perhaps and finally plenty of good seasoning - not too much salt, because of the bacon, but plenty of fresh ground pepper.
Chip the veg as you would do for a pasty, the swede smaller than the potato. Take a small to medium fry pan and heat it up. Fry off some of the pork fat until you have a nice base, then remove it. Now fry the bacon and after a little while add the onion, then the swede. Cook for a few minutes.  Put the kettle on for boiling water.  If there is not a lot of fat, add a little lard or dripping. Now put in the chipped potato and stir, making sure everything is cover with the fat. [here is where I sprinkled in a very small amount of vegetable bouillon, but the ancients would not have had that].  Season well with sea salt and lots of freshly ground pepper. Keep the pan on high and pour over some boiling water until it is within half an inch from the top of the veg and bubbling like mad. [be careful, it will spit]. After a half a minute turn the heat right down and cover.  I used a round of foil, loosely scrunched.  Simmer gently until vegetables are soft. The swede and potato will look the same colour as when they first went in the fry pan,  giving rise to the name of the dish - Raw Fry [or so I have been told]. Top with a poached egg if you wish.  A very quick, delicious wholesome meal, handy for knocking up when you come home from the mines and fields. If some folk were not lovers of bacon, small thin strips of skirt was used instead. I would also imagine some would add chopped parsley or other readily available herbs, like chives as I did. I just went outside my back door and picked some.


Note: Whole large hocks cost around £3.99 and I made two delicious meals from it. The bacon is full of flavour and darker than other cuts. Just lovely and my husband ate the above for his tea, in Cornish heaven as he munched away. The secret is using good bacon, from a whole piece, with NO added water. PLUS, warmed up it is even scrummier, if that is possible. 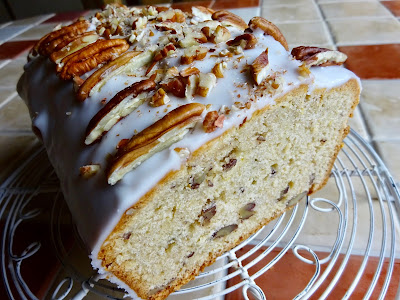 I love Pecans, I love lemons, so what is not to love in this easy peasy cake. A beautifully moist cake with so much flavour.

You will need a 2lb loaf tin, lightly buttered and lined, bringing the parchment up over the long sides to help you lift it out. Pre heat your fan oven to 150C

In a medium mixing bowl, place the flour and bp, then rub in the butter until it resembles breadcrumbs. Add the sugar, zest and nuts. Mix well.

Whisk together the eggs and the syrup and stir into your dry mixture. If too stiff you may need a little milk. Mix well. Tip into your prepared tin and bake for about 50-55 mins. Allow to settle in the tin for a few minutes then lift out and cool on a wire rack.

When cold, make some glacé icing with icing sugar and the lemon juice. Spread over the top and scatter over some more finely chopped pecans.

Posted by CornishKitchen at 06:05 No comments: 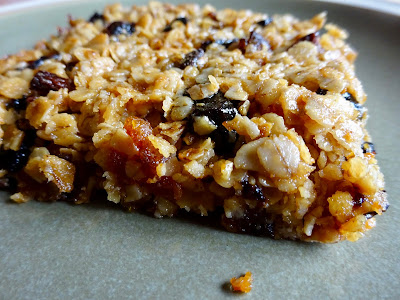 This bake is so easy! Made in, literally minutes, with just one saucepan to clear away! You need to get the soft, ready to eat dried fruit, as in Lidl, for less than a £1 a bag.

You will need a small Swiss Roll tin, lightly greased and lined and pre heat your fan oven to 160C

Melt the butter, sugar and syrup in a medium pan then take it off the heat and stir in the oats. Mix well then stir in the chopped fruit. Thats it. Done!

Tip into your prepared tin and level off, but don’t press too hard. Bake for 40 mins.

Make into squares while still warm then as they firm up, lift onto a rack and peel off the parchment.

One of the easiest yummy recipes - ever!!!
Posted by CornishKitchen at 00:10 No comments: