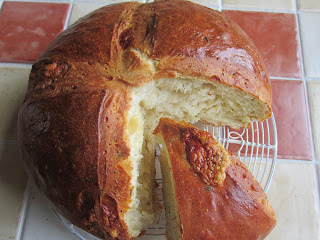 I have no words to describe this truly scrumptious loaf. It is very easy, especially if you have a mixer with a dough hook, but the kneading is good for your muscles anyway!
It is made with mascarpone [I love using that in cakes as well], parmesan and a blue cheese of your choice. I used Bodmin Blue [Asda sells little 3 oz packs in their mixer range of cheeses] but any blue will do.

In a large bowl, or your mixer with a dough hook, place:

Knead for about ten minutes, but just before the time is up, add:

or if like me you put the timer on, then went to hang the washing on the line, then forgot about it, add another minute to mix the chives and cheese in! No matter. 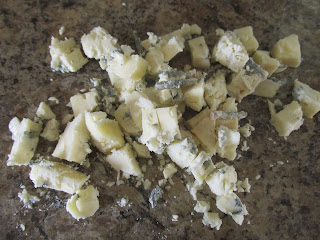 Place in a warm spot - I used a window with the sun streaming in [usualy!!], then allow to rise until well double in size for about 1-2 hours. Tip on to a lightly floured surface and gently knock back, then shape in a nice round and place on a baking sheet. Cover with some oiled cling film and rise again for about 45-50 mins.

Preheat your fan oven to 200C.

Take an egg yolk and a tablespoon of cold water. Mix well, then brush over the loaf. This makes a great glaze. I then made slashes in a cross shape. You need a very very sharp knife for this or a lamé. A lamé holds a razor blade and is very handy for slashing. I bought mine online.

Just perfect. Enjoy! The texture is so soft - I tore the pieces out of the loaf to try and show this, plus the oozey bits of melting cheese. Is oozey a word??? It is now.

Posted by CornishKitchen at 00:55 No comments: 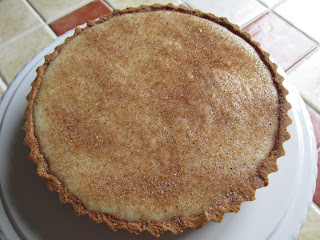 It is impossible to visit South Africa without trying this traditional dessert. I tasted several versions, [it’s a hard life, but someone has to do it] so I looked forward to making one as soon as I returned to Cornwall. While there I bought a couple of recipe books, but the one I like the most is entitled Hunger for Freedom, the Story of Food in the life of Nelson Mandela. I decide to use this old traditional recipe, rather than a modern updated one.
Originally a Cape Malay recipe, adapted from a bland, old Dutch recipe, brought over by the settlers. The Cape Malays adapted it, added the cinnamon to make it what it is today.
It’s quite easy and a very delicious cold dessert. I used a fluted loose bottom tin, maybe little more than an inch deep. I realised then that it would only take half of the filling quantity. So if you have a deep flan tin, go for the whole lot! These can also be made in little individual tarts. Or make a larger tart. The “pastry” is enough for two smaller tarts.

The recipe is in two parts.

Cream the butter and sugar, add the egg slowly, beating with each addition. Beat in the flour, salt, spice and BP and bring together with your hands. Roll out the dough as much as you can - it is very short [I did it in about 3 pieces] then press it evenly into a 8” [20cm] pie dish that has been lightly greased, patching and levelling out with your fingers or the back of a spoon. Trim around the edge. Chill for at least 30 mins then line with parchment and fill with baking beans and bake blind for about 25 mins at 180C. I then took out the beans and continued baking for another 5-10 mins at 160C. Lightly dredge the base with more cinnamon, then cool.

Beat together the 3 eggs and sugar. Warm the milk until it is just about to boil, then remove from the heat and slowly add to the egg and sugar mix, beating well with each addition to ensure the eggs do not curdle. Add the remaining assembled ingredients and beat well. gently cooking over a low heat until it comes together as a custard, [ just a minute or so]. Do not stop stirring! It is ready when it is thick enough to coat the back of a spoon. Allow this to cool a little then pour into the cooked pastry case, then leave to cool until completely set - at least an hour.  Once it has set, dredge with cinnamon sugar. Serve room temperature - I never saw it chilled.

You can make your own cinnamon sugar: mix ¼ cup granulated sugar and 1 tablespoon cinnamon powder in a screw top jar. Leave for a few days to infuse, shaking now and then.
But you can buy it in large supermarkets.

A true taste of South Africa. So scrummy. I served it for dessert last Friday, when I cooked for my family and everyone loved it!

NOTE: please make sure your cinnamon is well in date. The flavour deteriorate quickly.
NOTE: I used English cup measures - it seemed OK!

Posted by CornishKitchen at 00:05 No comments: 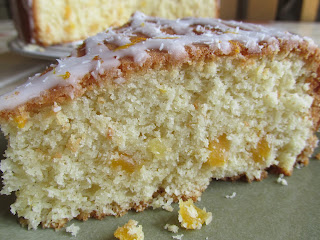 I found the idea for this recipe many years ago in a magazine and the taste is fruity, moist and sweet and quite different for a teatime treat. Mango is one of my most favourite fruits and is perfect in this cake. The crystallised dried diced Mango is fairly expensive - it will cost about £2, but it is worth it for this delicious treat. I bought the fruit in Grape Tree, but it is readily available in health food shops and suchlike. They come in little diced chunks but to get the lovely moist mango taste all the way through, you need to chop it until the bits are very very small. See pic on my Blog. This is an easy peasy all in one method so is a doddle.

You will need an 8” spring form, loose bottomed cake tin, lightly oiled and the base lined with parchment. Preheat your fan oven to 180C

Mix well for a couple of minutes, it is much easier with an electric hand whisk, but a wooden spoon is good! Then fold in the fruit. Tip this mixture into your prepared tin and bake for about 40 mins, until just firm to the touch. Cool for a few mins in the tin then turn onto a rack. The cake is enough on its own but you can decorate it.

Make an icing: I used just plain icing sugar with a little extra zest then drizzled it over the top, with a tad more coconut. But you could make a butter icing as an alternative to top it.

Posted by CornishKitchen at 02:46 No comments: