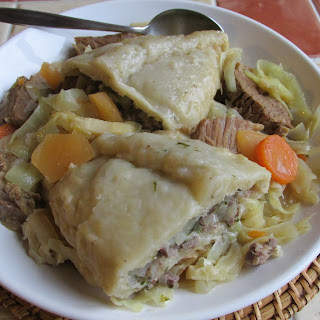 We return briefly to very old Cornish recipes and I have been told this was generally made in the Camborne Redruth areas, then spread out from there. Yet, I was born and bred in Stithians and I had never heard of it, until some of my husband’s rellies from Camborne told me about it. So this is Pat Manuell’s version, as described to me in precise detail and she has approved the method below!! I am sure there will be other variations and I will be most pleased to hear about them. Pat and her husband Alan live in Camborne and are seniors with a love of basic old Cornish foods. Pat makes this regularly and it is a favourite with her family. I have decided to photograph each stage as I make this dish! See my Blog! It would be such a shame if this recipe from our heritage, was lost.

You start off by making a Beef Broth. I am not giving you any quantities as it depends on how many pasties you are making and how much broth you need to hold them all. Apart from that, it is a movable feast and you use whatever veg you have to hand. [but no potatoes]

A nice piece of boiling brisket - to hold 2 or 3 pasties, I used just over 1lb. I cut my piece in two.
Vegetables, including swede, carrot, onion, I also used a small parsnip and a leek as well. You will need a white cabbage later on. 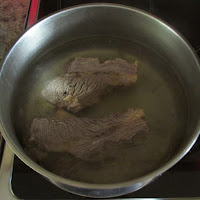 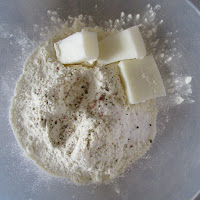 In a LARGE saucepan, place the brisket, adding boiling water to just cover and plenty of seasoning, cover and boil for about an hour until the meat is tender. Remove the meat to cool. [I did this stage in the morning and left the beef in the stock until the afternoon, then returned it to the boil]. This is your beef broth base. Add your chipped vegetables [as if you were making stew, very slightly larger than for a pasty] then continue to simmer for about another ¾ hour.

When cool enough to handle, chop up the meat into pieces, Pat says whatever size you wish! Return this to the broth, along with plenty of torn white cabbage. [Pat says it MUST be white cabbage], any other would wilt away, the white holds it’s shape. Check seasoning, this is most important. Simmer for maybe 10 mins until the cabbage has wilted slightly. Your broth is now the base to hold the pasties. There must be enough veg and cabbage to make an almost solid base, so that the pasties do not sink too much.

Meanwhile, while the beef in boiling….

Make a pastry. Using plain flour and about ⅓ lard to flour, rubbed in until it resembles breadcrumbs, then add cold water to bind. Chill for a bit. [I used 9 oz plain flour and 3 oz lard for 2 medium pasties and I had some left over] 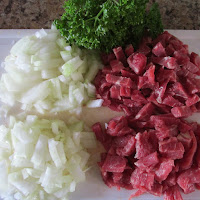 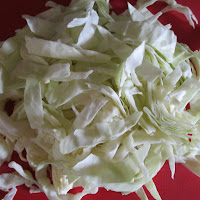 Roll out some of the pastry and make pasties, using just beef and chopped onion, about tea plate size or maybe a tad bigger. It must not be too thin. I used 4-5 oz skirt for each pasty, along with plenty of onion. Crimp firmly as this must not break open while boiling. Do NOT put a hole in the top, as we would for ordinary pasties.

Place your pasties on the top of your Beef Broth and gently simmer for about 1 hour.

Serve in a large dish, with your boiled pasty sitting in the beef and vegetable Broth.
You will have Broth left over for the following day lunch! 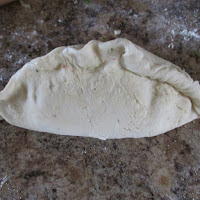 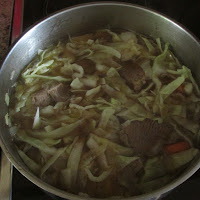 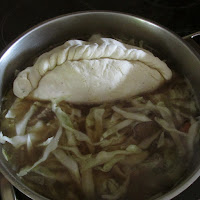 My verdict? The smell as you cook the brisket is wonderful! The pasties are basically large dumplings, shaped like pasties, stuffed with meat and onion! Good, although very filling. The Broth was beautiful, especially the following day!

But I will admit a small break from Pat’s recipe. While the beef and veg were simmering, just before I added the cabbage, I decided to add about one third of a rich beef stock pot. No more, that is all it needed, but it did add an extra depth to the flavour.

My husband enjoyed it! So I will make it again before long.

I cannot thank Pat enough for her input and help throughout! She was always on the end of the phone when I had questions!