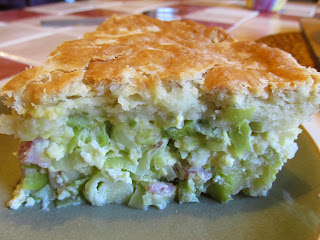 Or Leeky Pie. A very old traditional Cornish recipe and I took as a reference my old 1920s recipe book.

“wash, clean and chop about half-dozen good sized leeks” Well that was easy to understand and do!
“put in a pan and cover with boiling water, drain in a colander; then put a layer in a pie dish, then some fat bacon, very finely sliced. Then another layer of leek and bacon until dish is full” 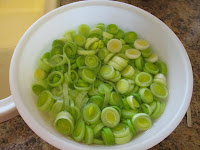 Well that was pretty easy to understand. The thinly sliced leeks needed blanching and then draining to remove the moisture. But the fatty bacon was another matter. I have mentioned before our flavourless watery [13%] bacon. So - I am sorry to say I plumped for Pancetta! [Sainsbury's cubetti] 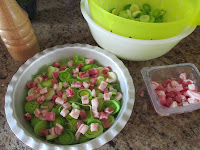 “salt to taste, sufficient milk to cover. Boil for half an hour on the top of stove”
I did not salt each layer as the pancetta would do its work, just plenty of freshly ground pepper and some sea salt flakes on the top. I also pressed the leeks and cubetti firmly down as I did not want the crust to sink later on. Our forebears would have used full cream raw milk, of course. I used semi skimmed and hoped for the best, with a knob of butter for luck!!!!  see photos on my blog.
I placed the filled pie dish in the oven instead of on the top of my “stove”, covered with tin foil for the said half an hour but added another 15 mins as it would take longer to come to the boil. Then put it back again, uncovered for another 10 mins. [after taking it out, I left it to cool a bit before adding the crust].

Meanwhile I made the crust, immediately before using to cover the pie. Never store or keep suet pastry. Use immediately.
“Cover with a good suet pastry”. Suet pastry is little used these days but it is very easy. Just half Atora [I used vegetable] to Self Raising Flour [I used 6 oz flour and 3 oz suet] for this pie] and some salt. As suet is such a heavy fat, always use SR Flour when making suet crust. Bind the mix with about 4 fl oz very cold water. Gently knead, then roll out. Not too thinly.  Cover the pie, making sure you do not grease or press the edge as you have to lift off the crust before the end of the baking. 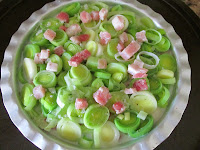 No timings or temperatures are given. Suet pastry was so commonly used everyone would know how long it took in their own ovens!! I preheated the oven to 210 then after the first 10 mins turned it down to 180 deg C.
“ten minutes before ready for the table, beat up 2 eggs and a spoonful of cream, remove the pastry and lay the beaten eggs over the cooked leeks. Replace the pastry and put back in the oven for ten minutes”. If there is any liquid remaining in the leeks before you do this, I think you need to drain it off first. Which I did. See photos. 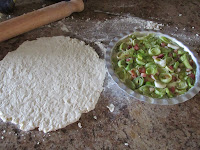 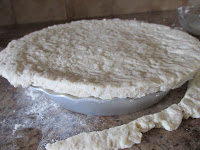 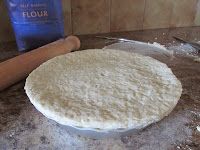 I baked the Leeky Pie for 35 mins then took it out and carefully, with a slice, lifted the crust off, forking through gently and pouring off most of the remaining milk, [not much] then pouring over the beaten eggs and cream. Replaced the suet crust lid and baked for a further 10 mins. But I lifted the crust off for a peek and it needed another 5 mins. I cooled for 15 mins before cutting through. It looked good! It tasted good too! The suet crust was not as heavy as I had anticipated either. That could easily be replaced by Rough Puff Pastry.

I wonder why this dish had died out? Until I started my research I had not heard of it. 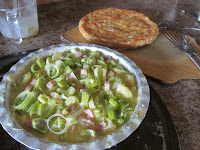